For Migrants Who Hope For a Better Life, Rosarno is a Dead-End Road

Though not as well-known as the Sicilian Mafia, the organized crime group 'Ndrangheta is centered in Calabria, Italy, or the “toe” area of the country’s “boot.” Despite the ‘Ndrangheta’s steady rise, quietly becoming the world’s most powerful and influential crime syndicate, Calabria remains the poorest and least developed region of Italy.

But this is not a story about ‘Ndrangheta. Nor is this a story about the failing economy in Calabria, where there is a historically rooted cultural fear of resisting ‘Ndrangheta pressures and where most young people feel that leaving the region is the only opportunity for a good education and career. This is not even really a story about the orange industry, which was once the blood of the agricultural economy in Calabria, controlled by ‘Ndrangheta and exploiting migrant labor to turn a profit. This is a story about a place where migrants’ hopes and dreams go to die - Rosarno. Located in southwest Calabria, Rosarno is a city that shows the reality of Italy’s failed system of welcome and integration. 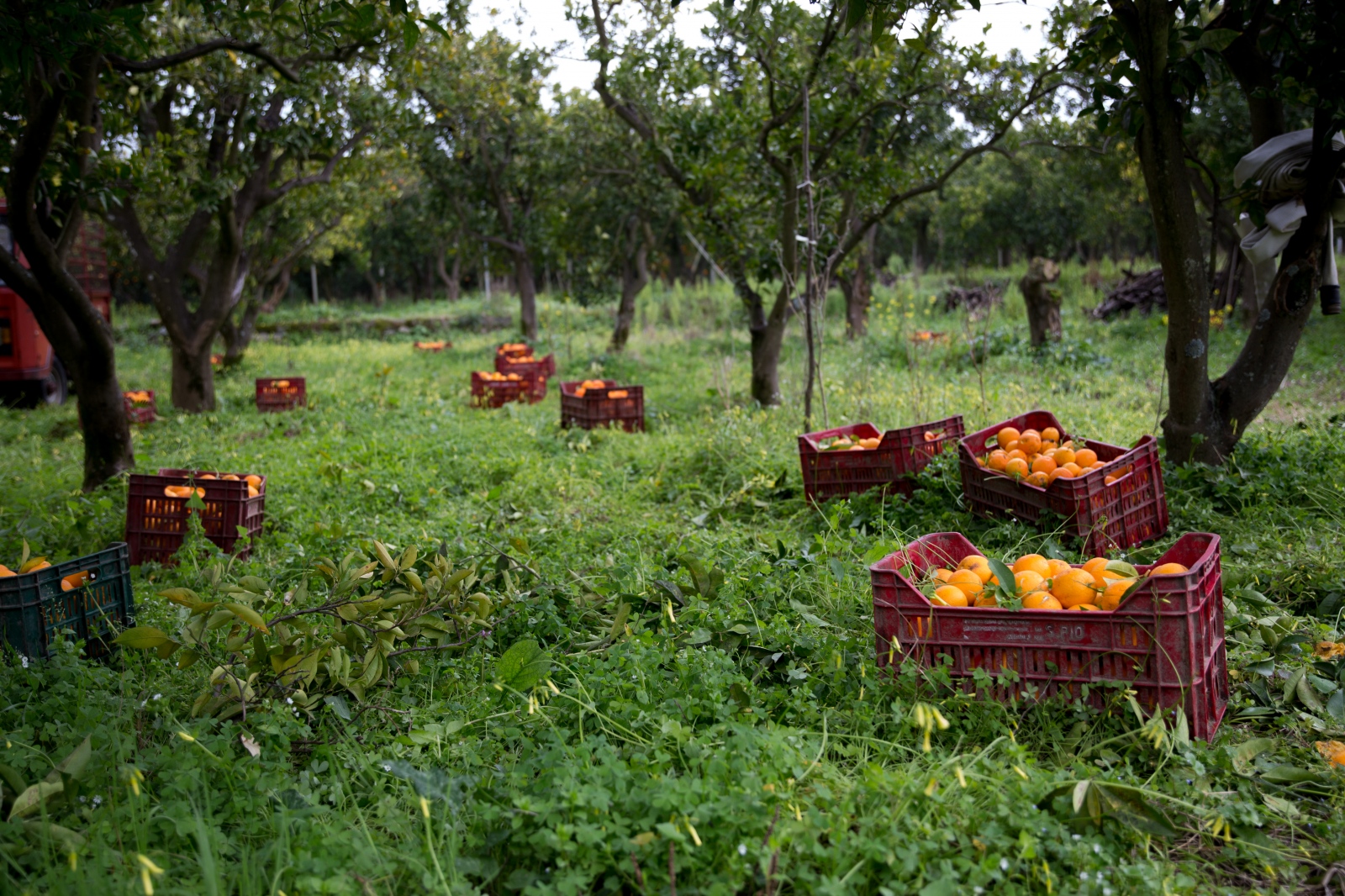 The winter citrus harvest brings thousands of African migrants living in Italy to Rosarno, Calabria every year. The area is one of the poorest regions in Italy and is also the headquarter of the ‘Ndrangheta – the largest and most influential crime organization in the world. Most migrants find day labor in citrus orchards connected to the ‘Ndrangheta. The work they do is typically without contract and they are paid approximately 25 euros a day. 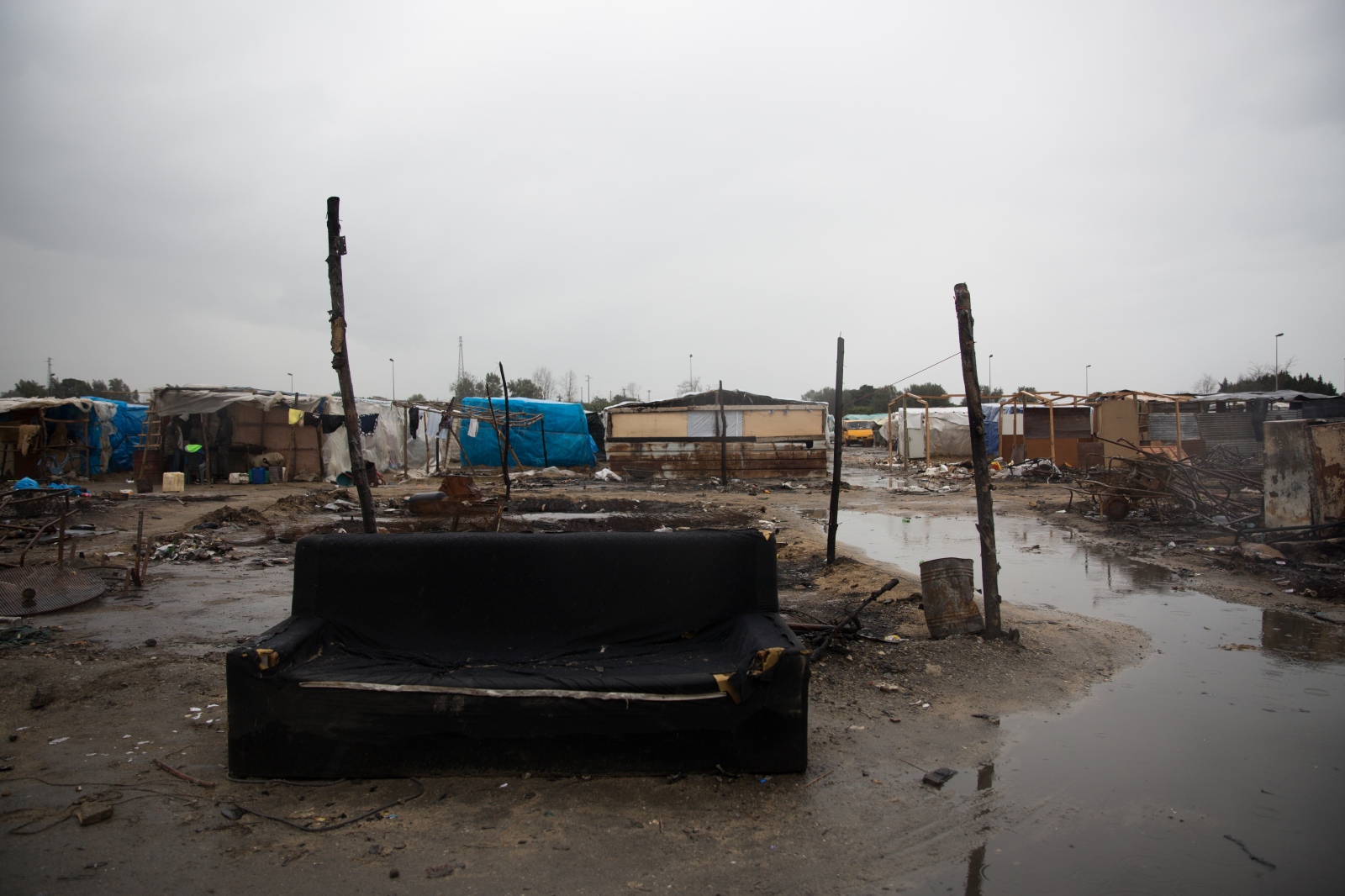 During the winter harvest season, over 2,500 people live in the tendopoli (tent city) on the outskirts of Rosarno. The conditions in the tendopoli are dire – there is no access to running water, electricity or trash disposal and it is a constant battle to keep warm. When it rains, still water floods the walkways for days. Tents can be shared by 6 – 10 people. 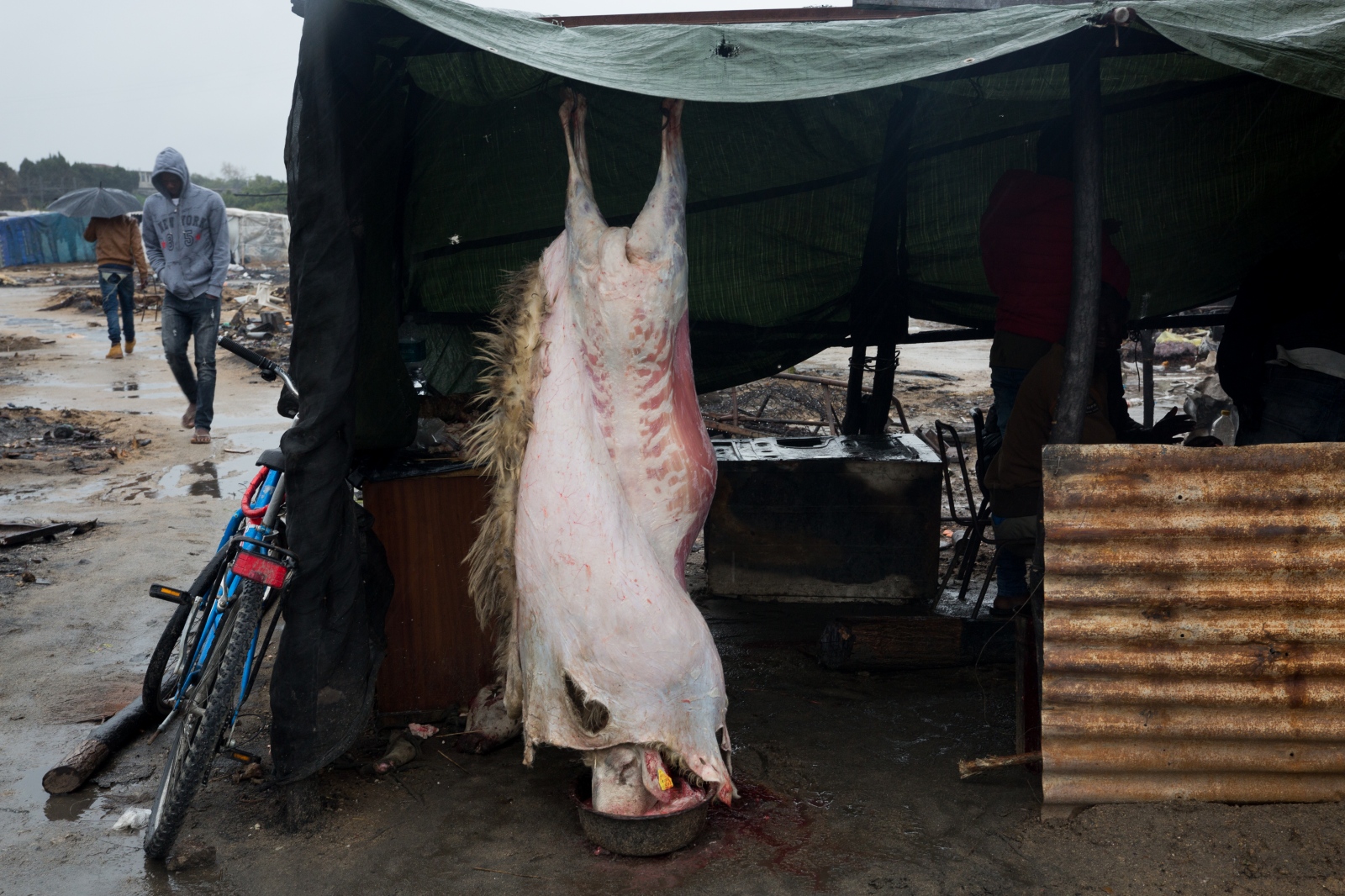 Inside the tendopoli, men have slaughtered a sheep. They will eat some of the meat and sell the rest. Because it is isolated in an industrial area, the tendopoli has its own micro-economy. There are markets, restaurants, bars, salons and more. 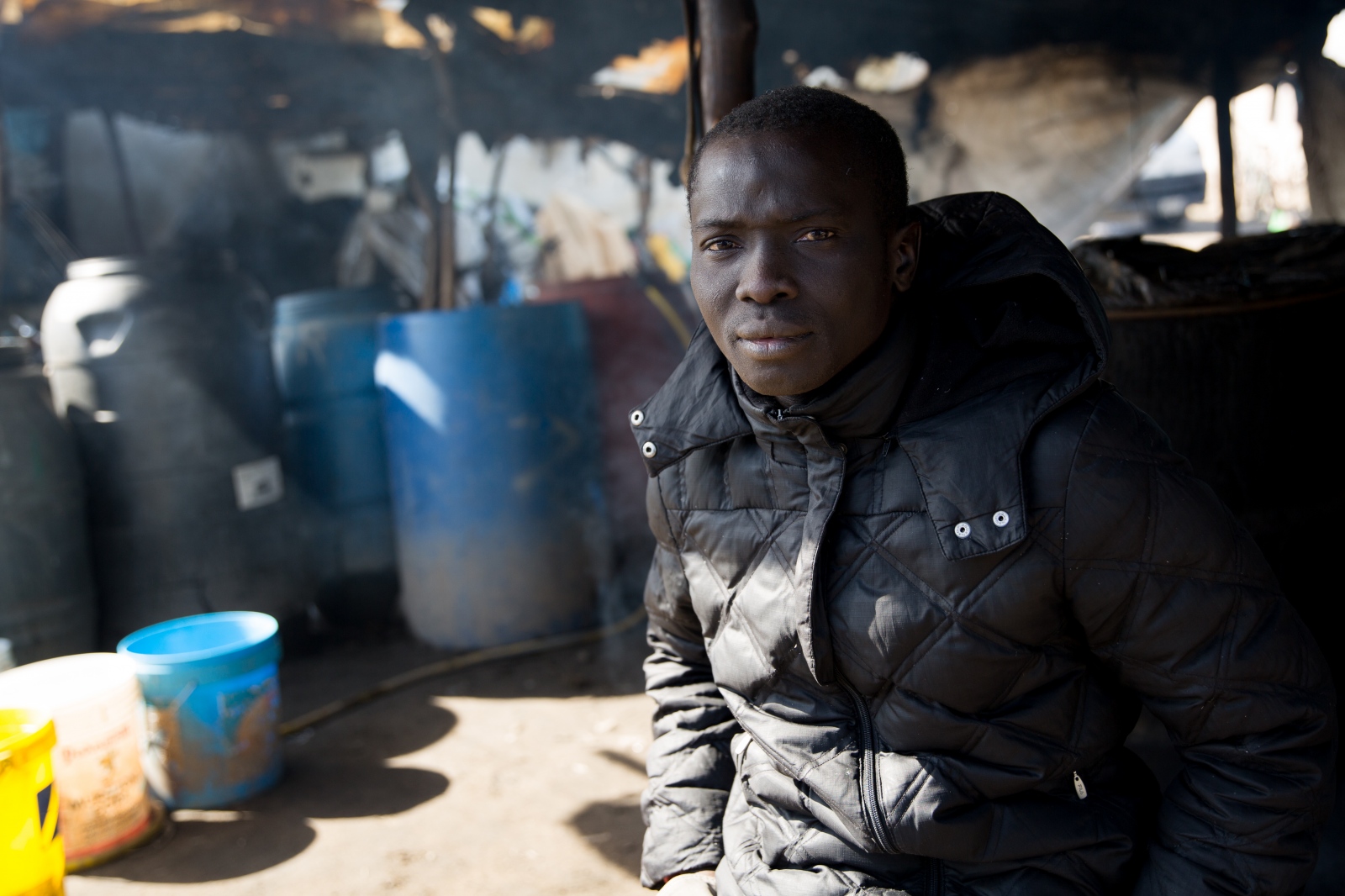 Solo, originally from Senegal, sells hot water for bathing in the tendopoli for 50 cents per bucket. He came to Rosarno to appeal his asylum case after being denied twice. Now, he tries to save money to hire a lawyer that can help him fight the decision, which he says can cost between 500 – 1,000 euros. 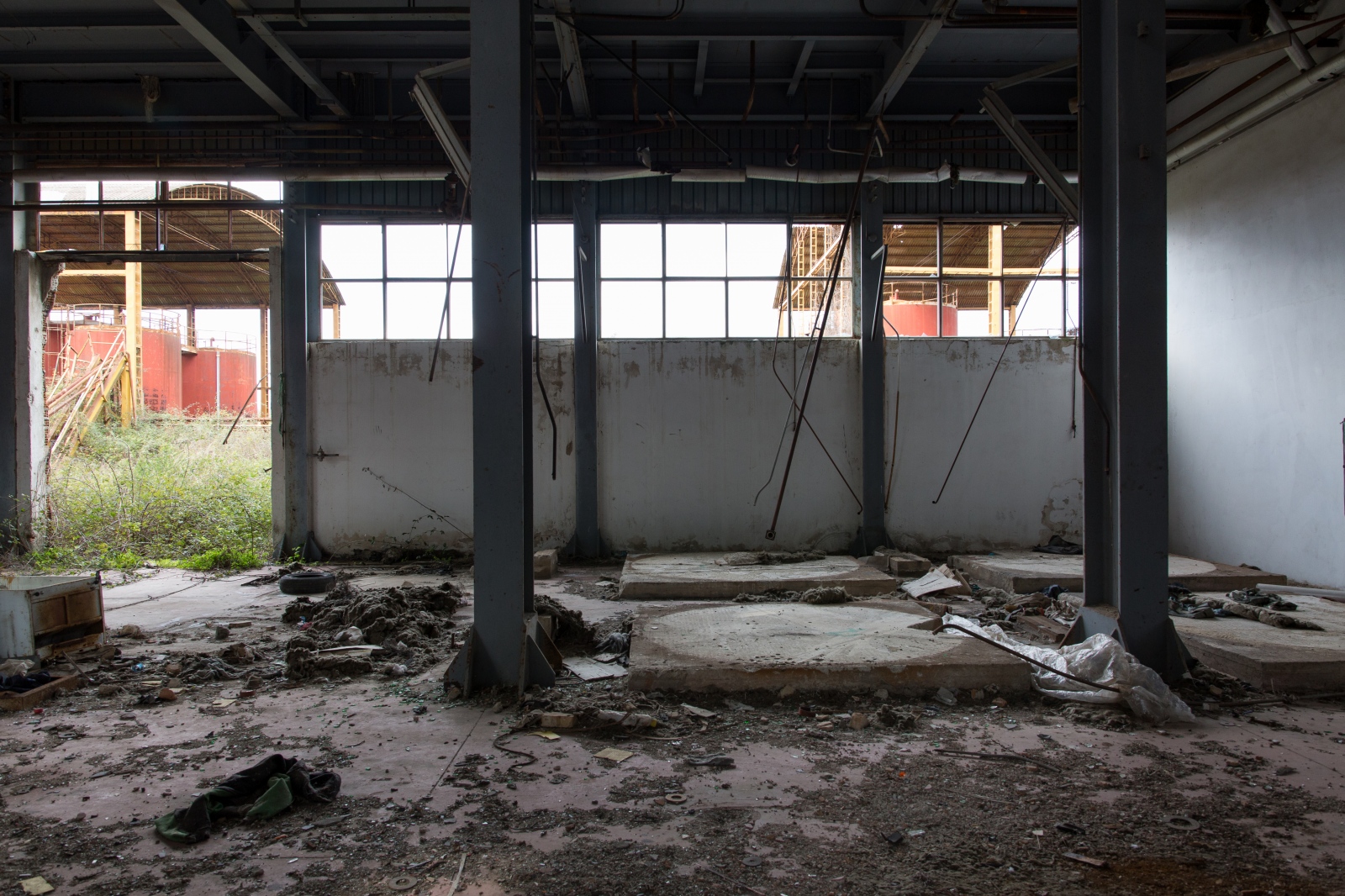 Hundreds of African migrants used to live in this abandoned chemical factory compound on the outskirts of Rosarno. In 2010, after a series of attacks on migrants (reportedly perpetrated by members of the ‘Ndrangheta) Africans rioted in the streets of Rosarno, inciting violence on both sides. Overnight, all of the migrants in Rosarno were rounded up by police and sent away. While migrants eventually returned to the area, the chemical factory was abandoned for good. 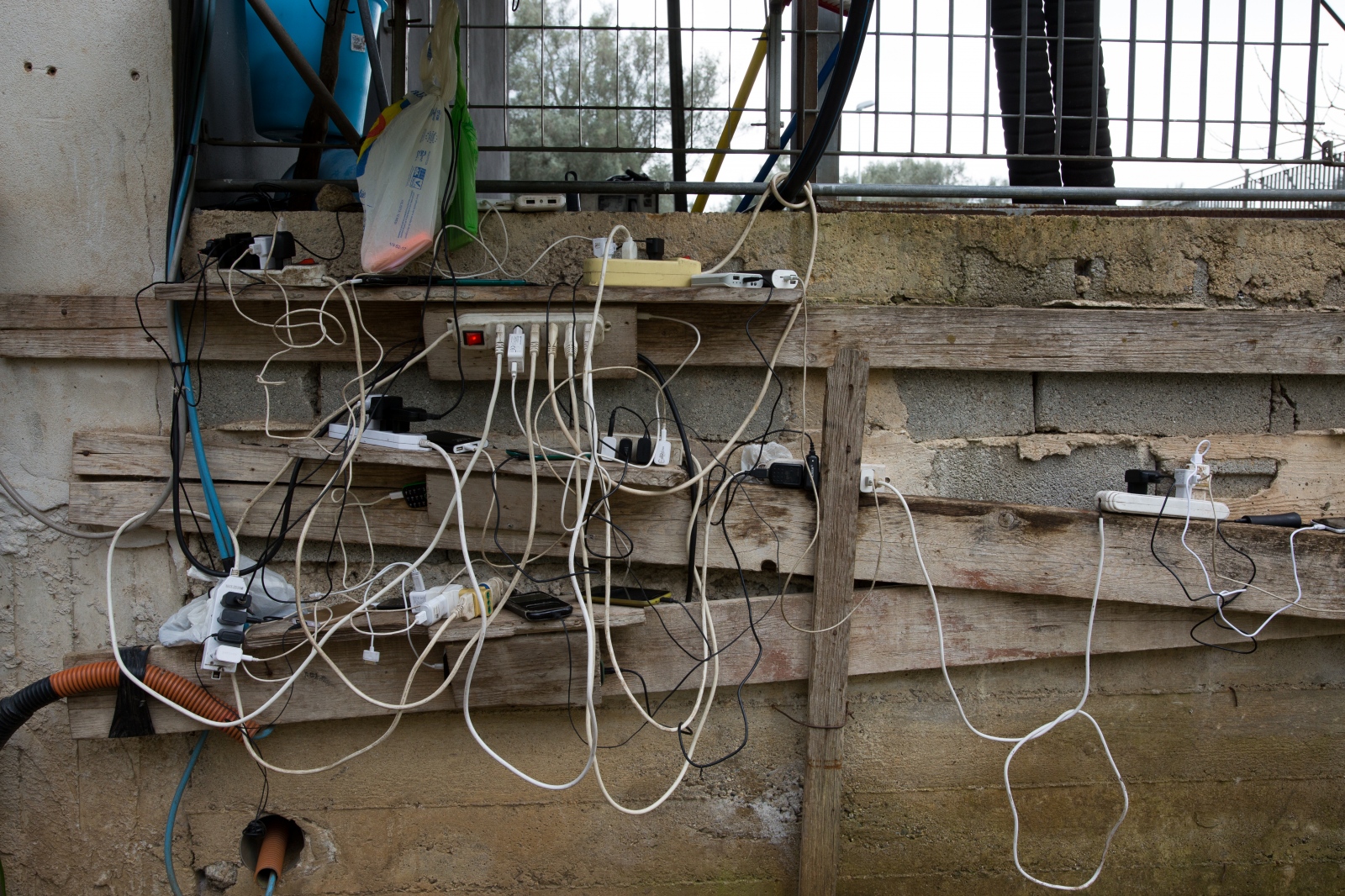 Nearby a large compound of abandoned houses inhabited by migrants, a sympathetic local shares electricity for them to charge their phones. 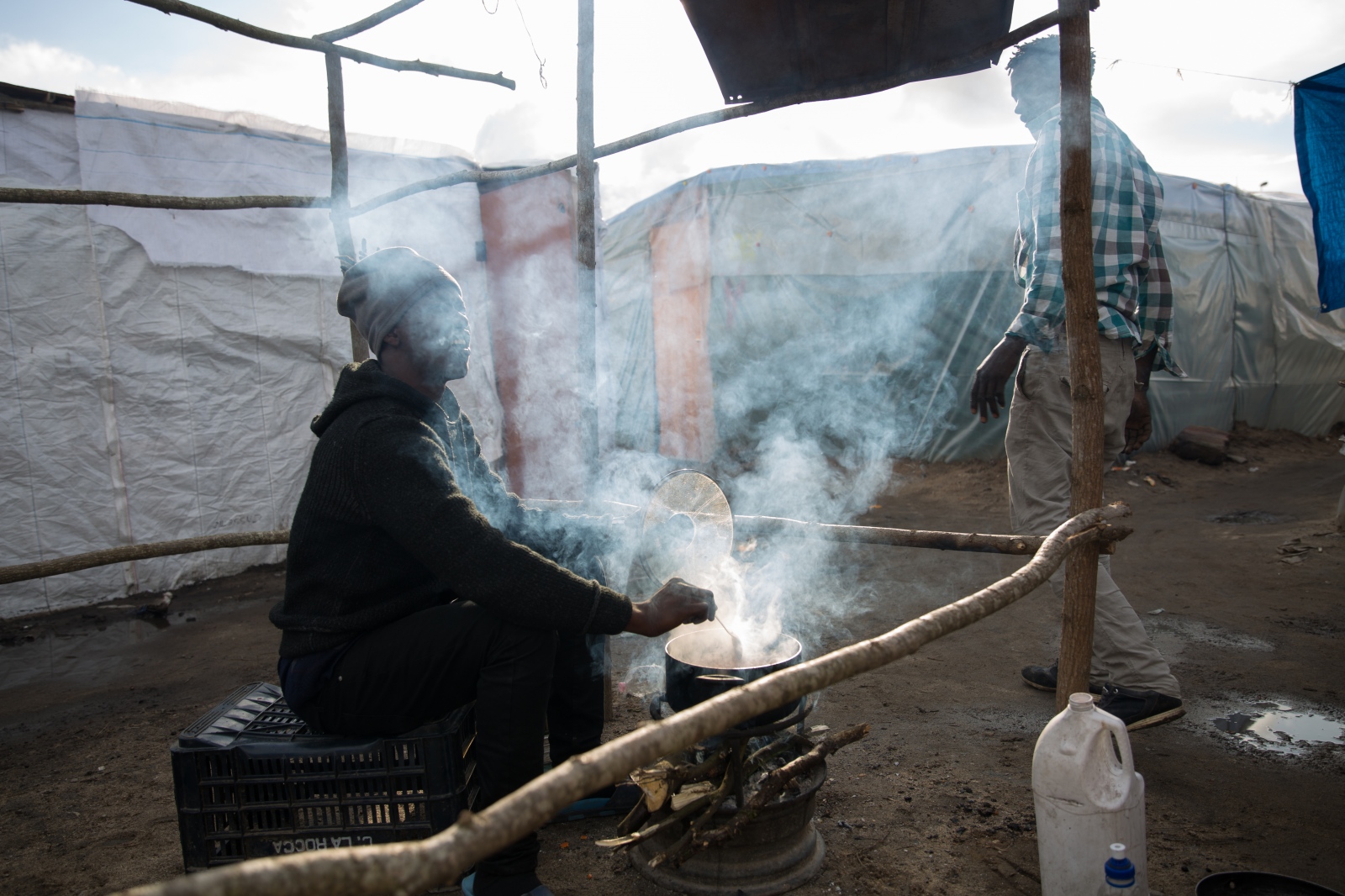 Usman cooks his dinner over an open fire in the tendopoli. 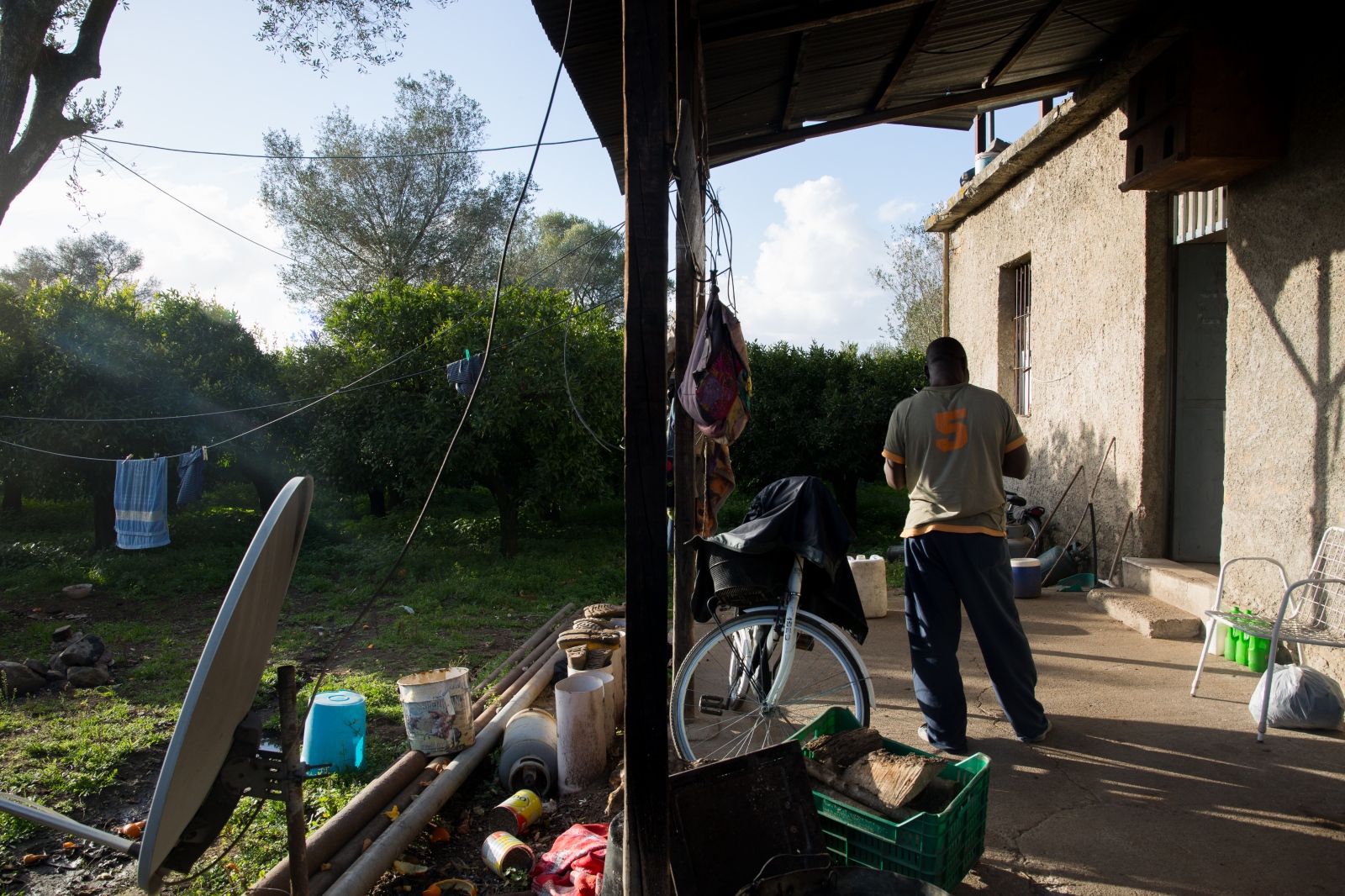 Ibrahim (name changed to protect his identity) stands in front of the rundown house where he lives with a group of migrant workers. The owner of the property allows migrants to live there while they work for him in the surrounding orchards. Part of the building’s roof is missing and there is no running water or electricity. Ibrahim, who gets paid between 20-30 euros per day, says, “The situation we are living here is very disappointing. When we left our country in Africa to come to Europe we hoped for a good life… but we live in a situation of shit. They are exploiting us.” 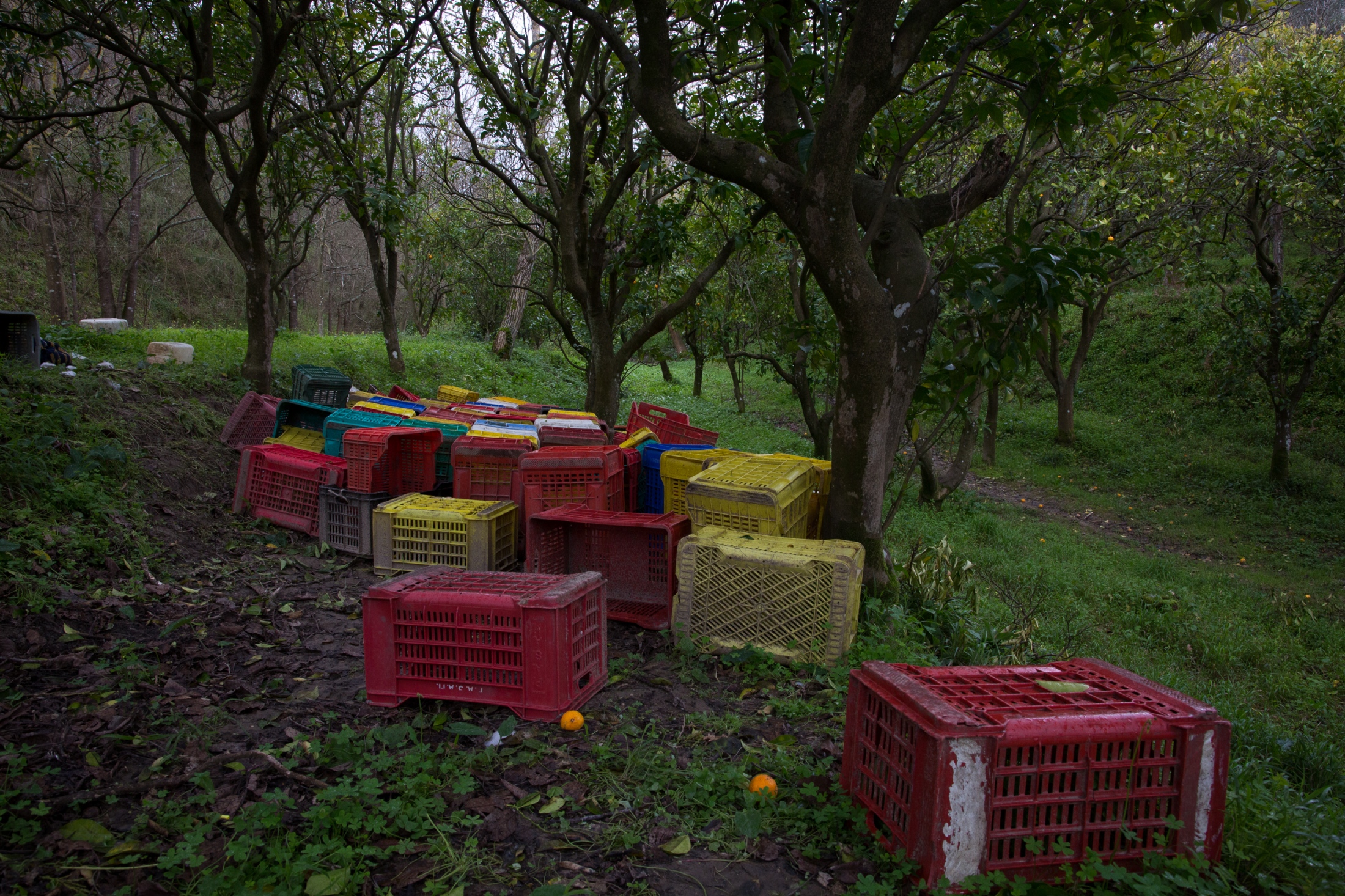 Orange crates left in the forest by migrants who have moved on to other housing or left Rosarno altogether. For almost all migrants, Rosarno is never a long term destination. The goal is typically to either save enough money to move on or to renew their documents so they can work legally or go to school. 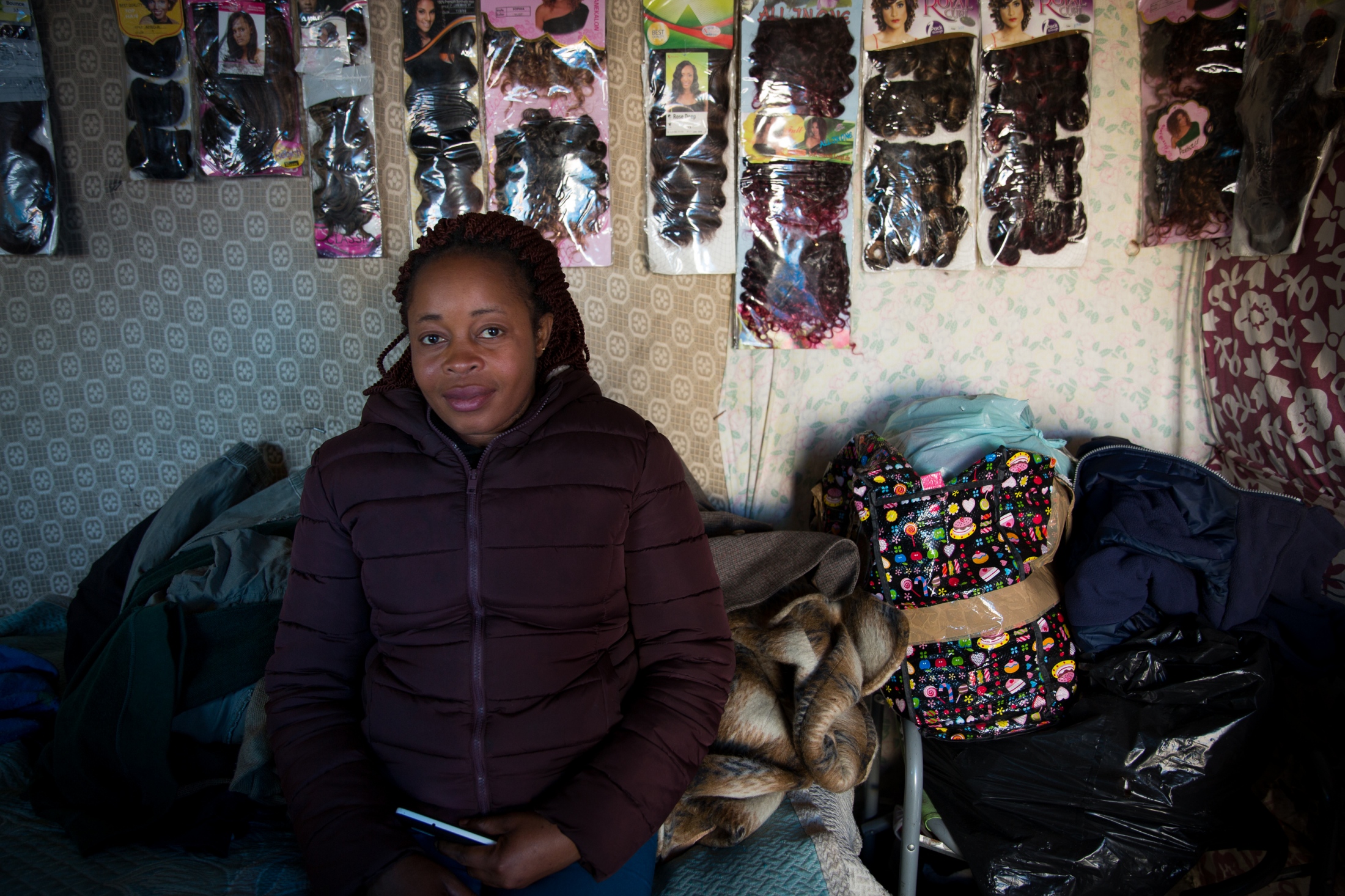 Charity, a Nigerian woman, sits in her tent. When I first met Charity in the summer of 2017, a fire in the tendopoli destroyed her home and shortly after she moved to another labor camp in Foggia, Puglia. She returned to Rosarno towards the end year at the beginning of the agriculture “busy season.” Charity says she had returned to renew her permit of stay. In Rosarno, only male migrants do agricultural work while most women living in the tendopoli are either sex workers or run bars in their tents. Charity makes a living doing hair. 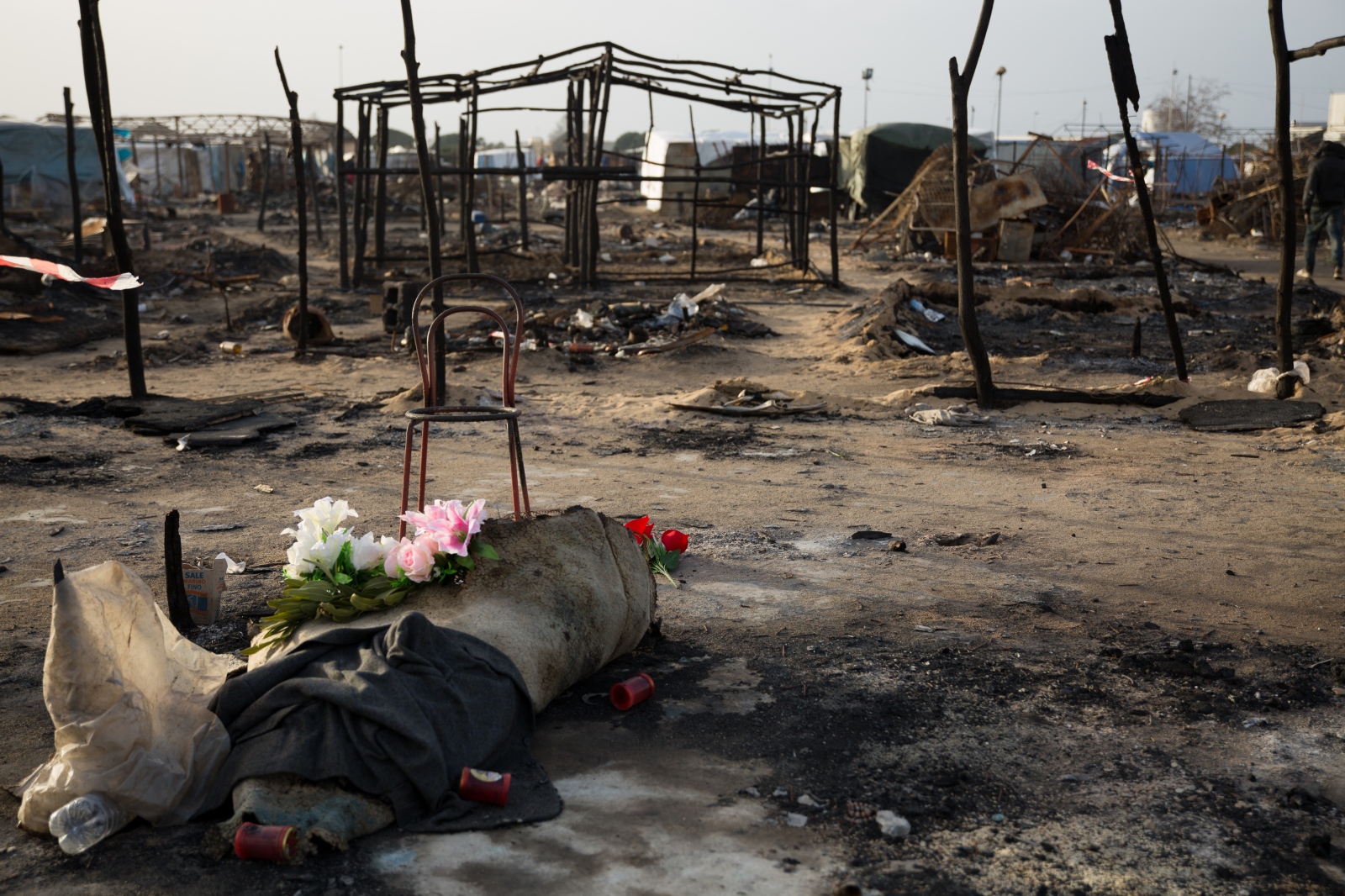 On January 27, 2018, at around 2am, a fire erupted in the tendopoli, destroying about half of the structures. Days after the fire, a memorial remains on the spot where 26-year-old Nigerian woman, Becky Moses, died on the night of the fire. Though it was widely reported that she became trapped in her tent and was burned to death, an investigation is being carried out to determine whether or not she was murdered and arson was used to cover it up. 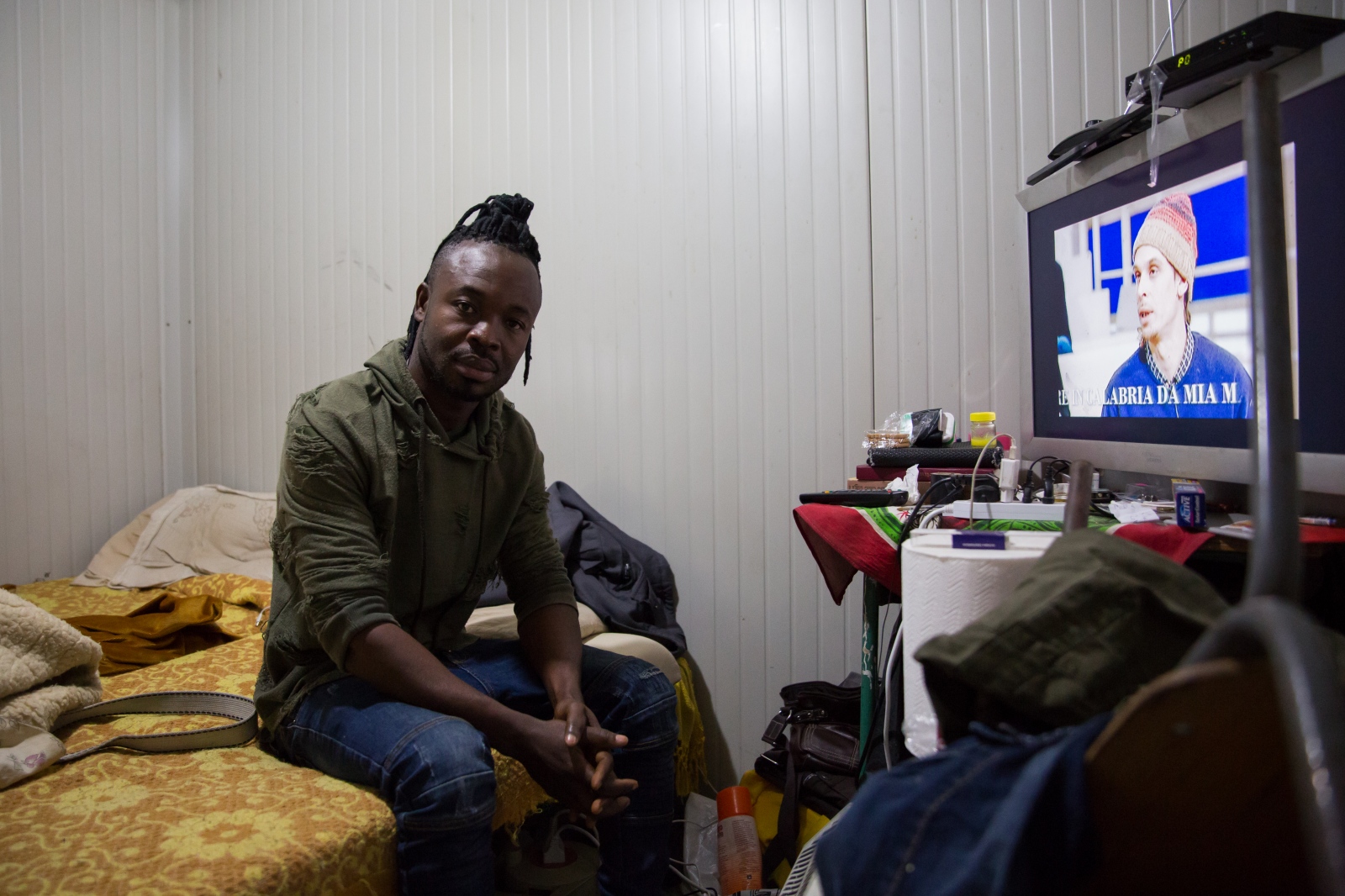 After the fire destroyed his tent, Michael stays with friends in "The Container," a migrant community living in a compound of shipping-containers-turned-migrant-housing that the government set up years ago. 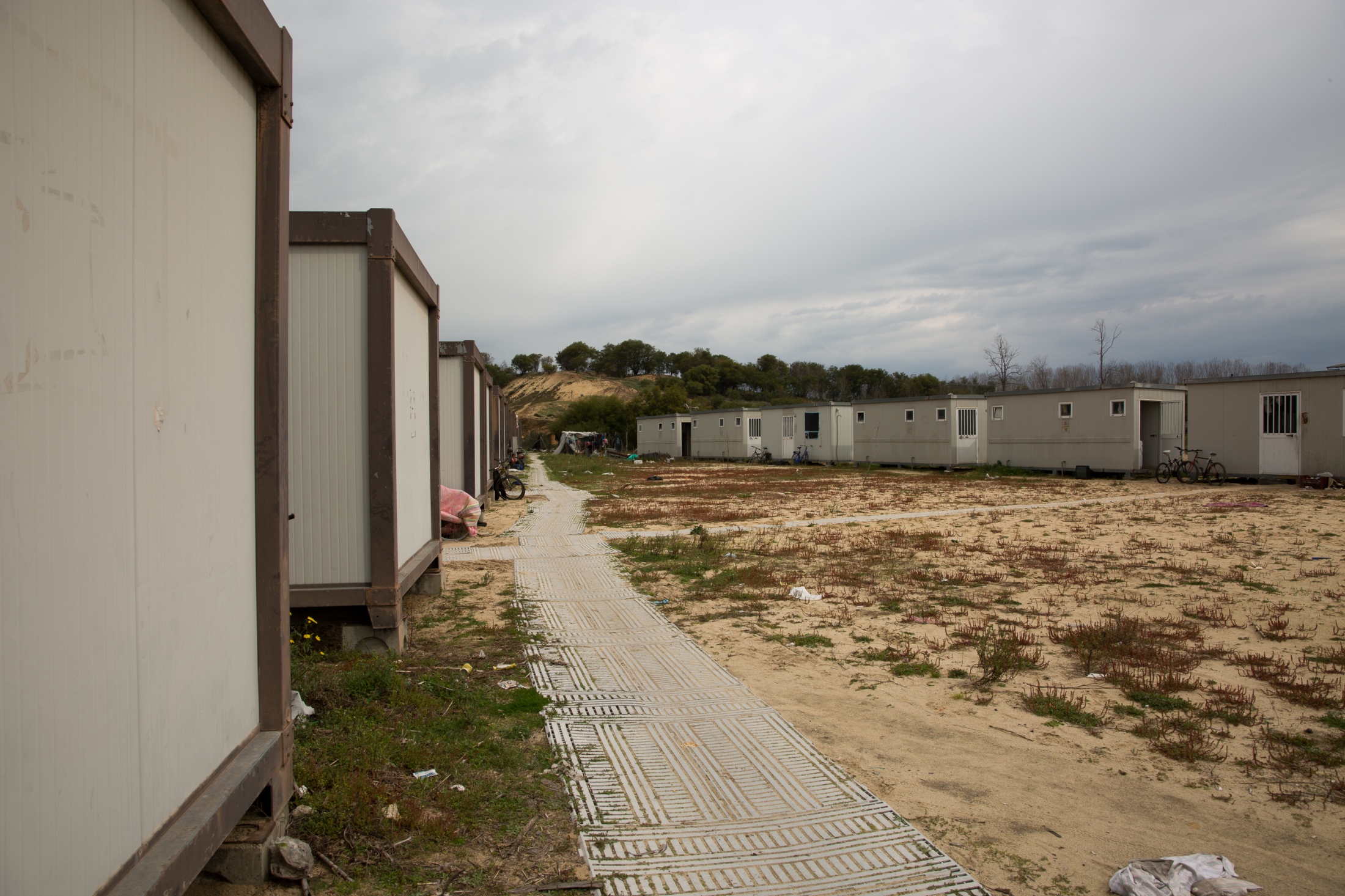 The Container houses a few hundred African migrants. On the compound, they have a small vegetable garden and raise chickens and rabbits to eat. The containers have working toilets, an upgrade from the neighboring tendopoli. 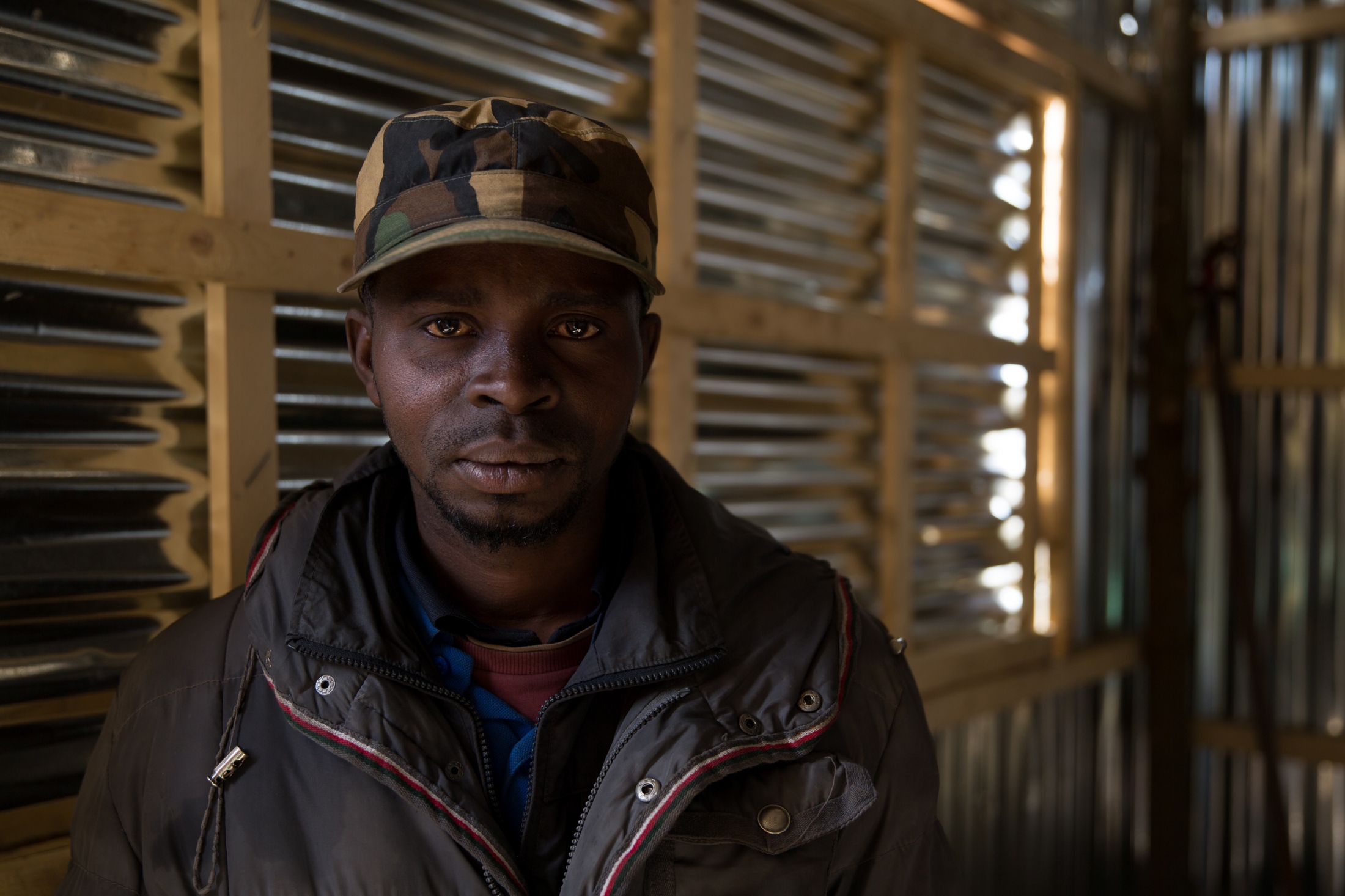 Joseph, a resident in the tendopoli, stands inside a new structure built after the fire. He says he is fed up with the working conditions and low pay. 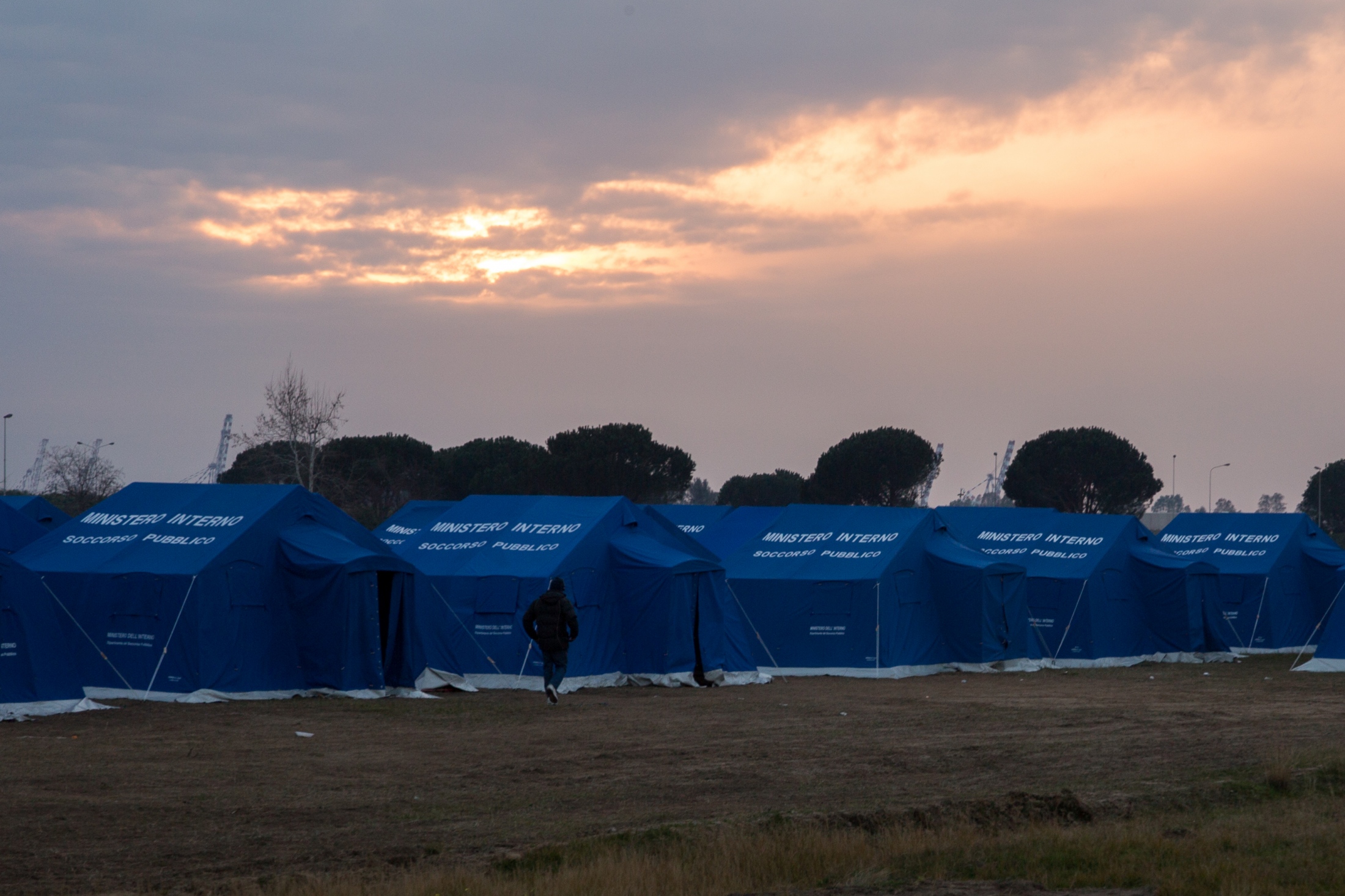 In an effort to find a solution for the living conditions in the tendopoli, the government set up a refugee camp of sorts in an empty field nearby. The new camp has proper tents, working toilets and showers, trash collection, and security. However, when the new camp was opened, efforts failed to ensure that those living in the tendopoli moved over. It reached capacity quickly with other migrants from the area and the tendopoli remained full and with residents trapped in the same dire conditions. 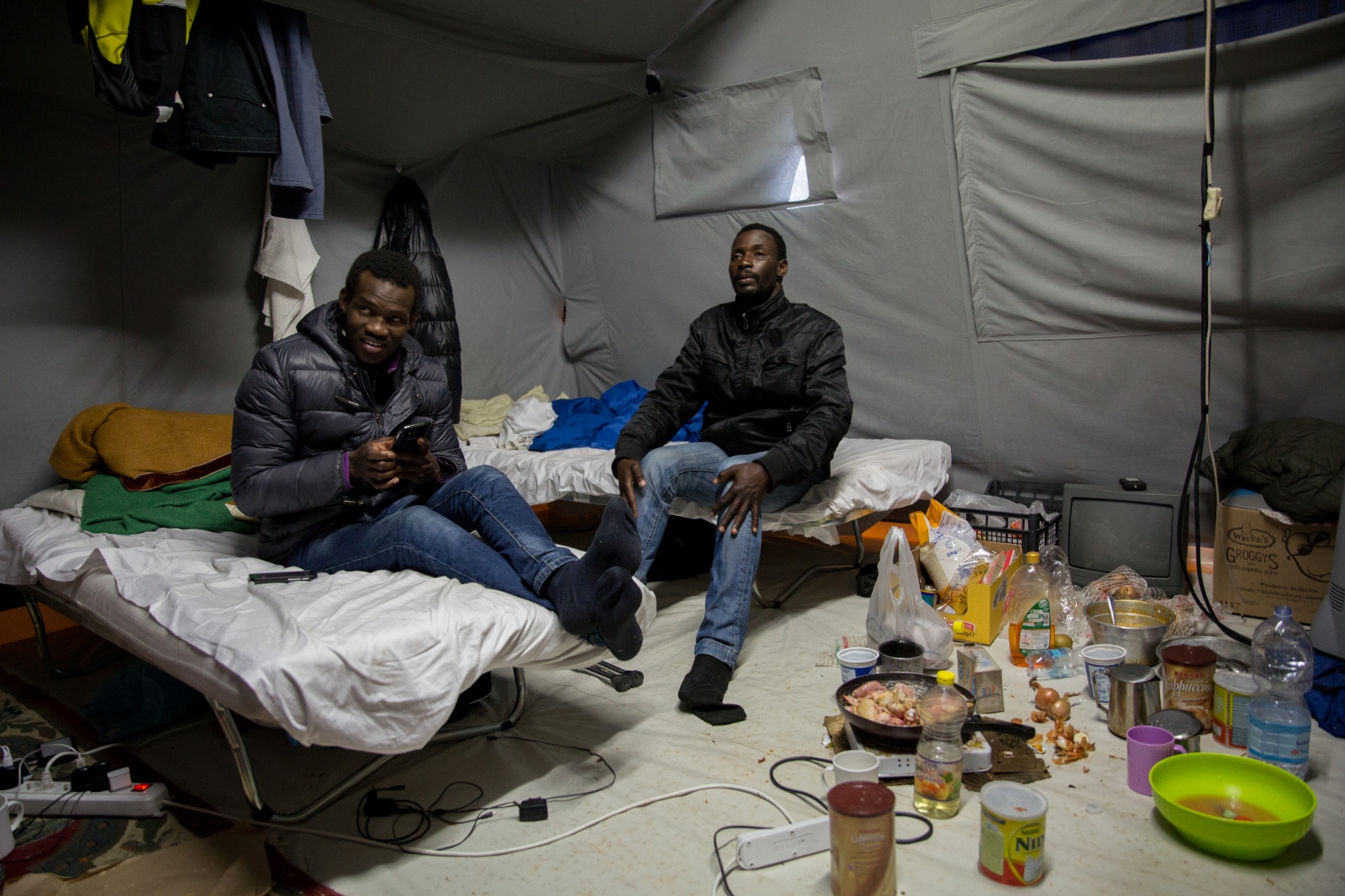 Men cook dinner in their tent inside the new camp. Unlike those living in the tendopoli, they have electricity and can cook on a hot plate. 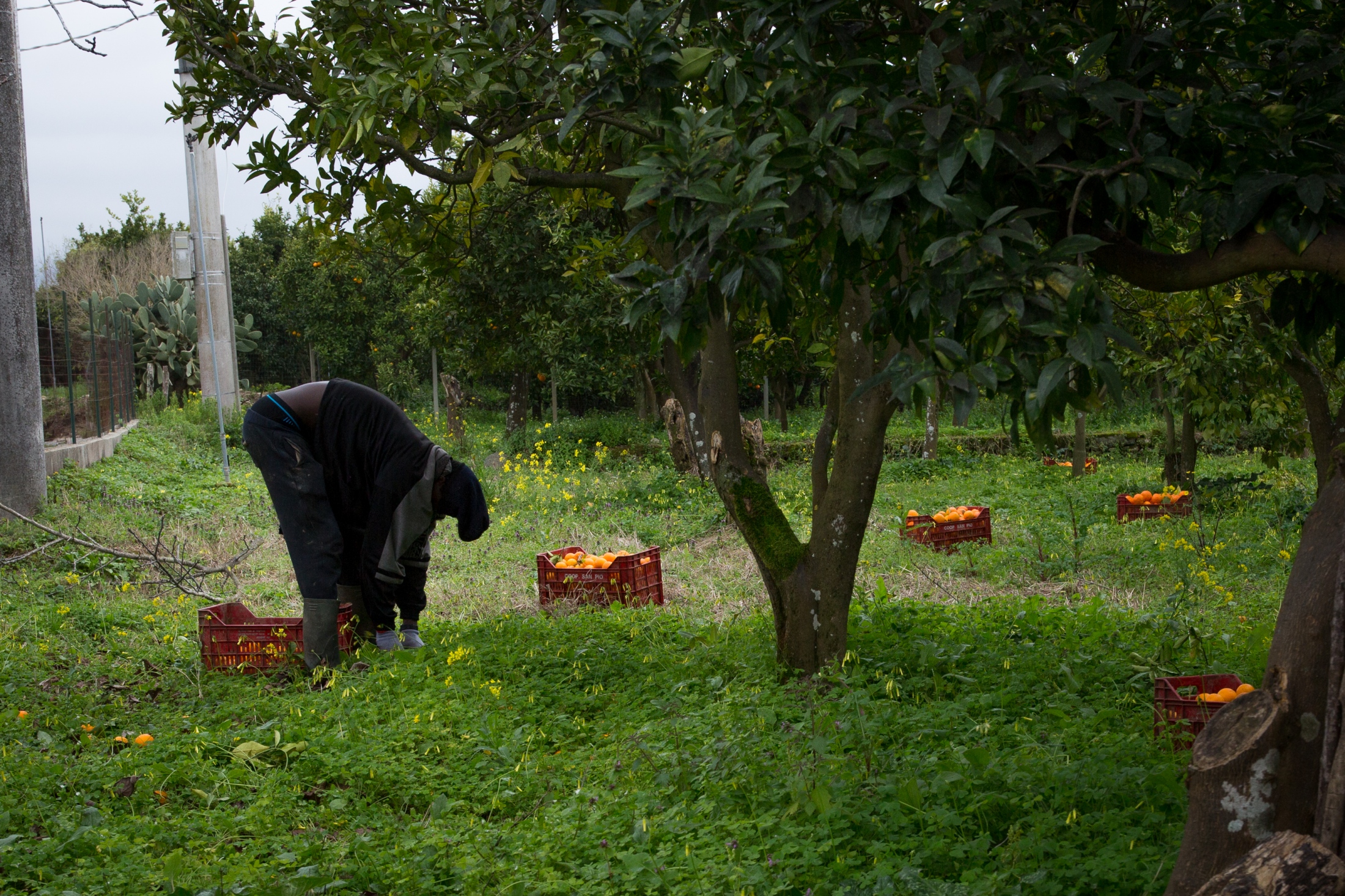 A migrant finds day labor picking up the orange harvest. For each box of oranges, he will earn approximately 50 cents. Workers doing this kind of labor are rarely given a legal contract. Without a contract, these migrants are stripped of their rights to fair pay, proper treatment, or care and compensation if they are injured while working. 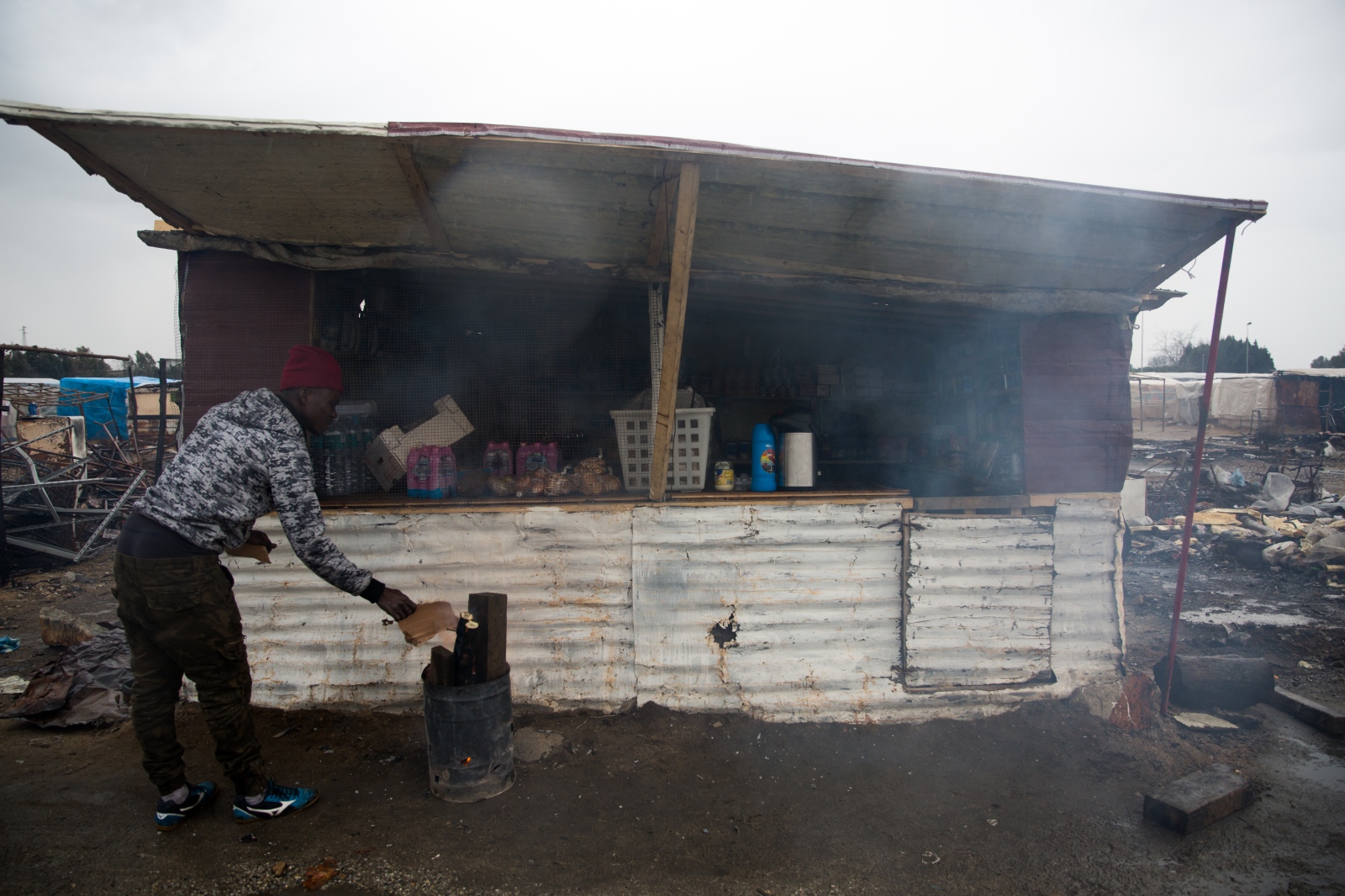 Dumbia builds a small fire for warmth in front of his shop in the tendopoli. He has lived here for two years, longer than most inhabitants, and says he is able to make more money in his small shop than others can make picking oranges. 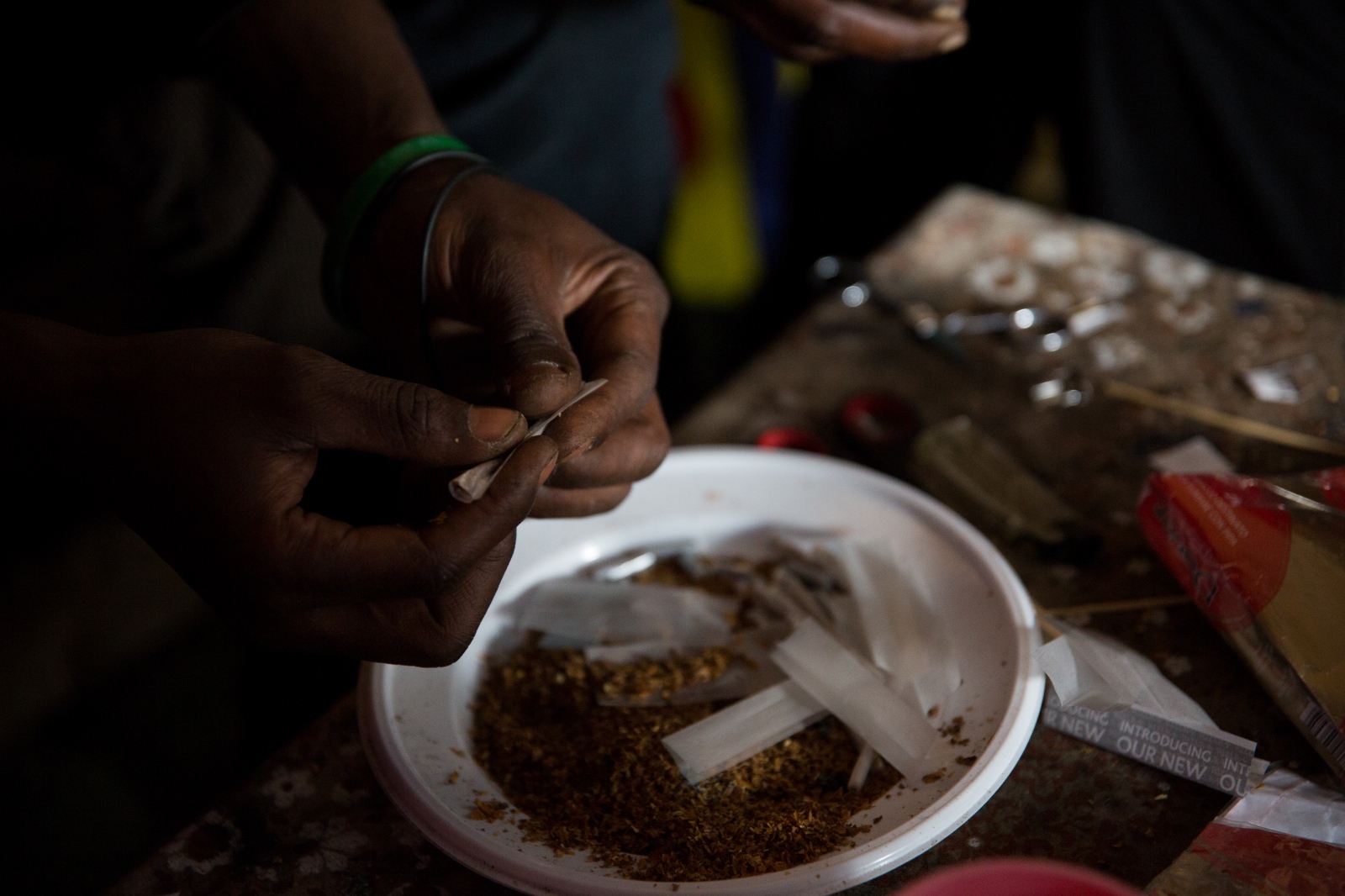 Hand-rolled cigarettes are sold for 30 cents each in tendopoli shops. 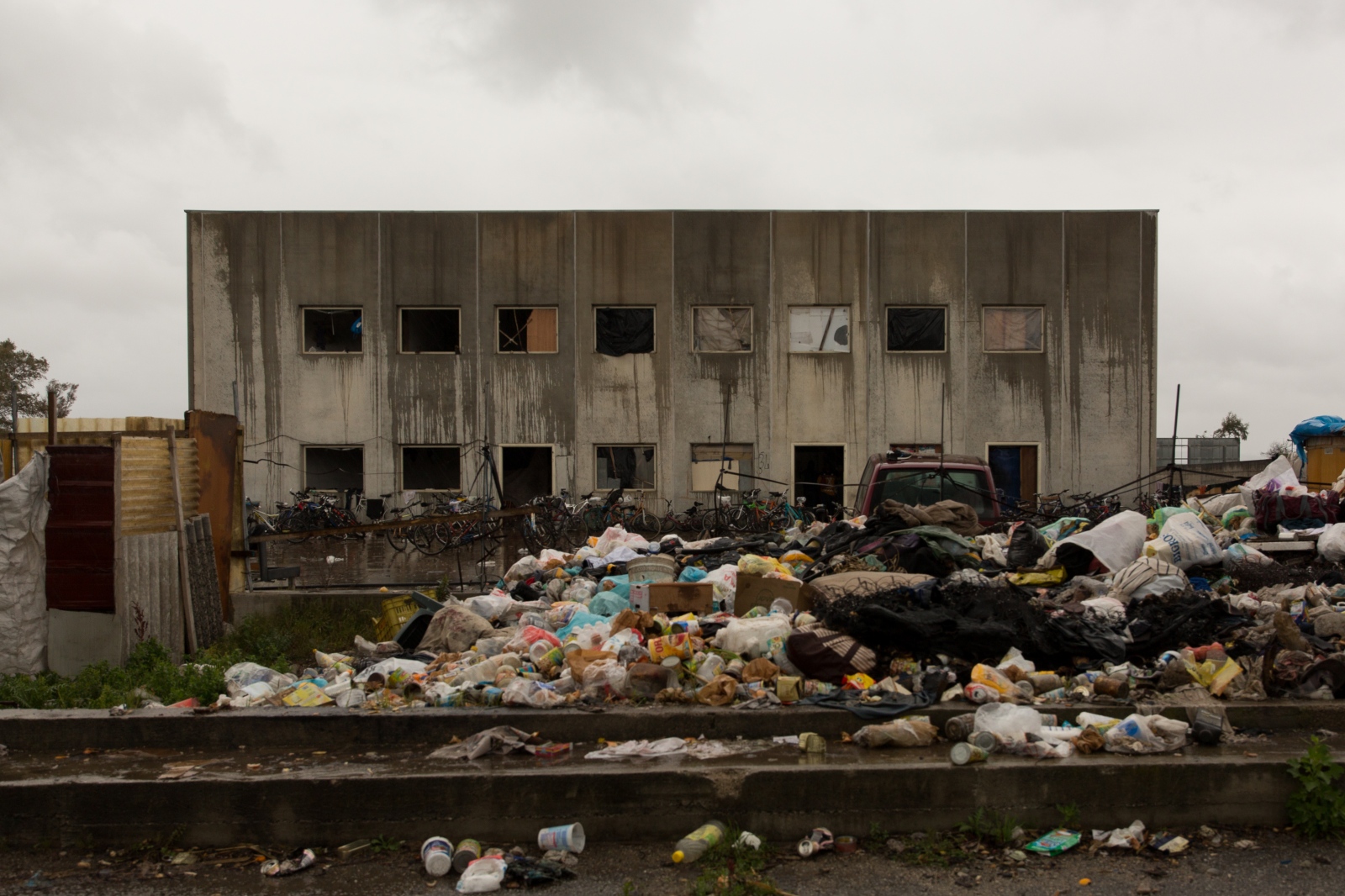 Hundreds of men live in this abandoned factory, nearby the tendopoli. The interior is lined with cots interspersed with propane stoves for cooking. There is no electricity, running water or toilets. 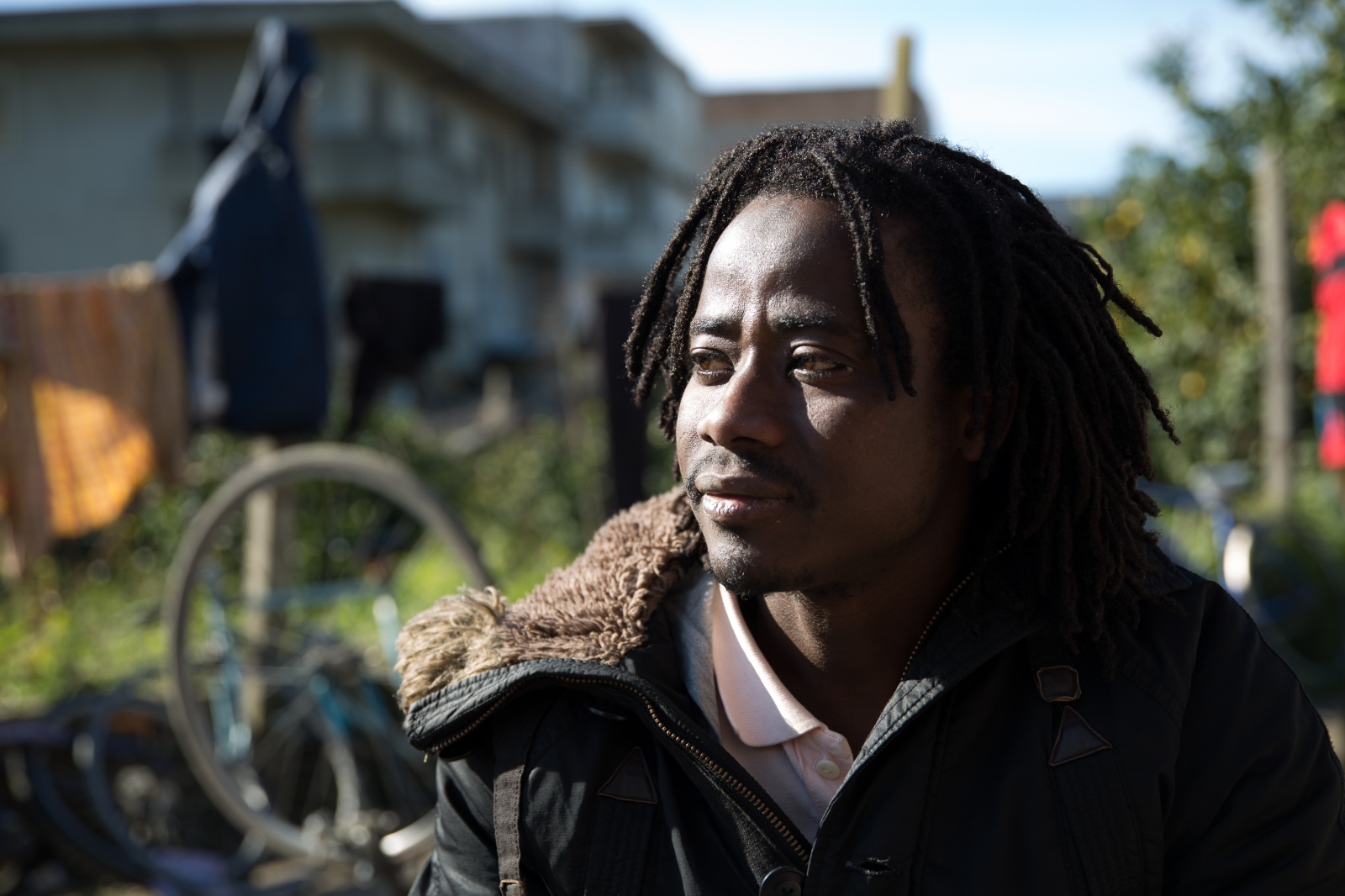 Dembo takes a break after spending the morning waiting to be selected by a caporali for work. Sometimes he can wait many days without any luck. Dembo worked in the tourism industry in The Gambia, but says he had to leave for political reasons that made it unsafe for him to remain in the country. 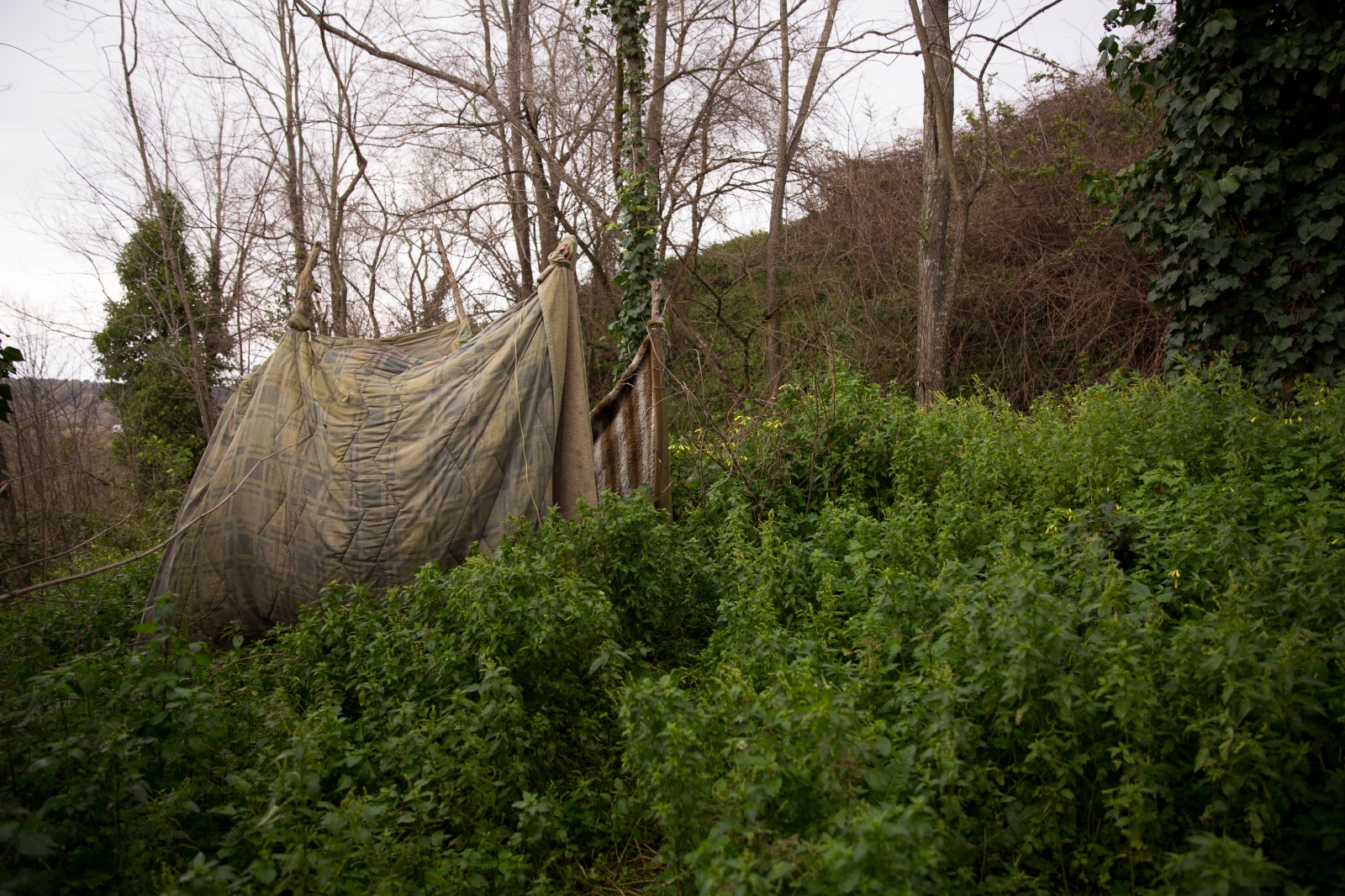 A makeshift toilet built by migrants living in an abandoned house. 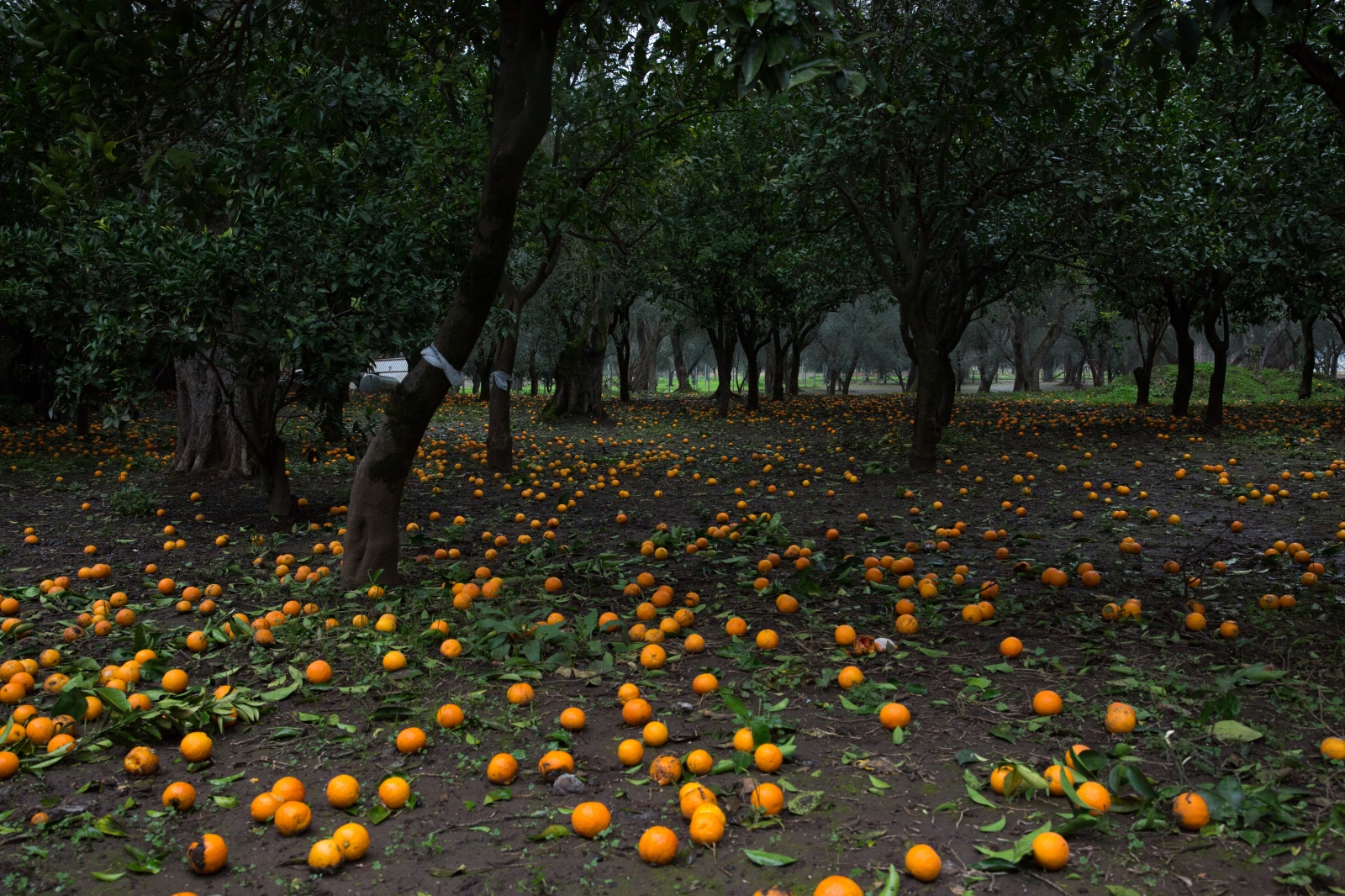 Calabria is one of the largest citrus producing regions in Europe. Production has saturated the market so much that it exceeds the demand. For some it costs more to collect their citrus than they can sell it for, and so they leave the harvest on the ground. This problem also makes the pool of work opportunities even smaller for the ever growing number of migrants searching for day labor.